As most of my friends, family, and followers know, I am not great at off-road.  Don't get me wrong I have done some over the years, my first bike being a Honda C50 field bike, which my brother and I used to use on a relative's farm, and later a CG125 that got very muddy on occasion, on the forest trails in North Yorkshire UK, but I never got into motocross or trail riding as a youngster.  In later years I bought a BMW F650 and did a few gravel rides in Spain before selling it.

Then the TET or Trans Euro Trail became a thing and I like many others started to dream about off-road adventures, crisscrossing Europe or even the TAT Trans American Trail.  Somewhere around this point, my mountain biking hit a roadblock, or tree actually as I took a tumble in the woods, breaking a clavicle in the process. After my recovery, I made a promise to my wife to be more careful and any thoughts of serious off-roading were dashed.

I still couldn't get the thoughts out of my mind though, first booking a day flat tracking with my son in Valencia and then buying a BMW R1200 GSA to explore a bit, or that's what I've told my wife, for now.

Covid then got in the way of my plans for the next two years, as it did for many others, some not so lucky.

That brings me nicely to this trip to Cataluña and Catalan Adventure.  I'd found out about Nick and Debbie's business through some local Spanish Facebook pages & groups and thought I would give it a go.

Catalan Adventure operates from Mora d'Ebre not far from the AP7 motorway linking Valencia and Barcelona.  They have a fleet of four Honda CRF250l for clients to use as well as Nick's trusty Suzuki DR 350 that retired to Spain for the weather along with the adventuring couple. The best part for me was the on-site accommodation in the form of a 3-bedroom casita that would sleep up to 6 and save me the hassle of booking something separately.

After some emails and WhatsApp messages, a date was set and I sat back and started to look forward to the adventure to come.

In late March after a couple of restless nights, I set off up the coast from my home in the Alicante province, the weather was glorious, for the first 2 hours then it steadily got worse, until it was pouring down, not so bad if I'd opted for the car, but being a biker at heart I'd chosen the GSA for my journey.  Finally arriving in Mora d'Ebro around 30 minutes later than I expected, I took shelter under a petrol station canopy and rang Nick to come and meet me.  After a few minutes Nick arrived and I think he was a little surprised to see me on a bike, most guests arrive by hire car from Valencia or Barcelona airports.  We had a brief introduction, it was like meeting an old friend really before he led the way through the lanes around the village to their base in the countryside and my casita for 2 nights.

Nick and I chatted for a while as he showed me the facilities the casita had to offer before supplying me with some wood for the log burner and setting a time for the following day's adventure.  After unloading the bike I headed back down to the village for some cooking supplies.  The casita is around 2.5 km out of town with around a third of that on gravel roads, fun on a bright sunny day, not so much on the GSA in the dark and rain on my return from the shops, but it was an adventure after all and I had come to trail ride.

After cooking pasta carbonara for myself I had a relaxing evening reading and watching an old film in front of a roaring log burner, a great way to spend an evening.

Soon it was morning and, unfortunately still raining, however, Nick and I had Whatsapp'd each other and there would be sunshine from around 11am so a new plan was formed.  When Nick came over to the casita he unlocked the garage and I got the first glimpse of the bikes and my stead for the day.

Nick's bikes are not new or immaculate I'm pleased to say, as an occasional incident, whilst trail riding, is unavoidable. They are 2016 & 2018 CRF250l's which show a few scars of use they are however meticulously maintained and cleaned for each customer, which is far more important.

After a quick change and a bit of faffing by me with cameras, we were off, out of the drive and straight into a steep uphill section, it was a narrow, twisting, concrete road,  with potholes and gravel to be careful of.  Up and up we went with Nick keeping pace ahead of me so I didn't feel like I was falling behind or being held up.  He is very good at assessing people's abilities and tailoring trails around them.

Over the rest of the day, we rode gravel and mud trails, through forests, over hilltops with superb views, and along river banks.  Nick stopped at regular intervals to allow a break, before heading off again.  On some of these breaks he told me about the remnants of the Spanish Civil war, which was fought quite hard in the area, there are trenches to see and old buildings from the war.  There is also a village called Corbera d'Ebro, which was destroyed, with most inhabitants being killed, the village, much like Oradour Sur Glane in France, has been left untouched and is now a museum and memorial.

Late in the afternoon, we stopped at a small hilltop tower to admire the views of the valley below and the river Ebro which is where the area gets its name from and what a view it is.

Over the course of the day, as my confidence had grown and our overall speed had increased, Nick added in some harder trails, steeper uphills, tighter bends, more rocks and puddles to avoid, it was great fun, but eventually, as my energy levels waned, the inevitable happened and I fell off.  Not in a big spectacular incident you understand, much more embarrassing, on a tight uphill hairpin, off the throttle, I stalled and then found that the combination of seat height and the steep slope was more than the length of my left leg and over I went.

After picking myself up and then the bike, Nick came into view, more concerned that I was ok than the bike, but there was no damage to either of us, a little bit of pride maybe.  Unfortunately the last of the GoPro batteries ran dry around 2 minutes before this happened so there is no footage otherwise it would be included in the video.

Rolling back into Nicks's drive, after returning over the same hills we left by, but at a greater speed and with a load more confidence I was sad to be putting the bikes away, but happy to be settling in for another night of relaxation in the comfortable casita with a cold beer or two.

Setting off in the morning to go home the rain was pouring again, but it had been a great weekend of biking and I would highly recommend Catalan Adventure to anyone looking for a few days of trail riding in Spain. 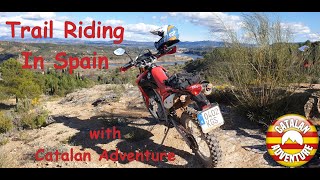 Catalan Adventure offer a great service, with a relaxed, friendly approach, they have 4 Honda CRF250l for customers to use, these are all A2 license compliant with no age limit on the insurance, (check before booking). One of the bikes is fitted with a lowering kit and Nick also has a couple of seat options to bring the height down even more for the vertically challenged. For those with less experience or newer / less confident riders, there is a field with banks you can have practice on before venturing out onto the trails and Nick will tailor the route to suit everyone's ability.  It is a great way to try your hand at trail riding whether on your own or in small groups, and Nick doesn't mix groups unless by prior agreement.

If you are looking for accommodation whilst in the area, book the on-site casita, it is well equipped and comfortable, even on a cold March weekend.  There are three bedrooms which can, by arrangement, be either twin or double beds, the price is great and Nick will give you a discount on bike hire if you stay on-site. Click Here for details.

If you are visiting the area with a non-biking family, then Catalan Adventure can arrange any number of activities for them to do, such as cycling, hiking, kayaking on the Ebro or even a visit to the beach is only around a 35-minute drive.

We have 23 guests and no members online