A couple of years ago whilst searching on Google for some interesting roads to explore, not too far from home, I came across a picture of an interesting looking bridge in a small valley.  I also found the road was near to Dos Aguas which I have been to before many years ago and decided to plan a days ride around the area taking in a couple of reservoirs along the way.

Fast forward a couple of years and I had completely forgotten about the bridge and route until somebody mentioned dos Aguas in conversation, I pulled out my notes and found the bridge again and a plan formed once more.  This time I would make it happen before everything else got in the way.

Managing to take a day off work is relatively easy for most people as they make arrangements with their boss and off they go, being self-employed the work usually comes first and biking second however I managed to arrange a Friday and after the usual early morning ritual of walking the dog, I was away.  This would have the added benefit of almost completing the KM's needed to run in the KTM 790.

Setting off from home, near Parcent in the Costa Blanca, a little later than expected I headed further up the Jalon Valley to Castell de Castels and then on to Gorga, the roads in the area are superb for bikers and still quiet even on a workday.  Blue skies and warm weather was the prediction for the day so mesh jacket and kevlar jeans were the prefered choice along with my Helite Air Vest.

Coming into the village of Planes for breakfast in Bar Luis I realised that I hadn't filled up with petrol before setting off into the countryside, luckily there is now a fuel station open opposite the bar, it was closed for a few years and would be a long walk to the next one a couple of villages over.  That's the second time I've done that on the KTM, I think it's just so much fun that I forget to look, despite the TFT flashing brightly at the 50km to go point.

Bike full of fuel and me full of breakfast an onwards we went, first a km or so towards Pego and then taking a left to the first of the reservoirs the article is named after.  This one is a favourite as you can ride over it and it's not far from home.  No time to stop for pictures though I just relied on the video for this one, bottom of page.

Further into the countryside up and over a few more ridges and I arrived in Xativa, hot and sweaty in the heat of the early August day, a quick stop at McDonalds for an ice-cream and Coke and on again looking for the valley with the elusive bridge.

After a few more villages and a couple of wrong turns, I finally made it, the bridge itself is quite impressive for a modern one but the approach to it dropping down the side of the valley is superb, with sheer cliffs all around to the river below.  After the obligatory photo stop, I carried on through the village of Dos Aguas and found Embalse de Forata, down a couple of km's of smaller lanes.

Surprisingly there was a good amount of water considering the time of year, pictures taken and a brief rest and on to Buñol, the home of the Tomatina festival, where I got lost in a maze of back streets as you can see on the video.  After the excitement of Buñol, I turned for home with a brief stop at Circuito Ricardo Tormo to snap a shot of the bike.

All in all a great way to spend a Friday, much better than working.  The KTM was a perfect partner for the route and behaved impeccably despite the warm temperature and is now ready for it's journey back to Moto Sport Carerres for its first service. 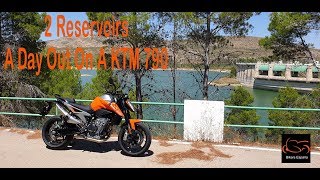 Click the map to see the route on Google Maps.

We have 123 guests and no members online